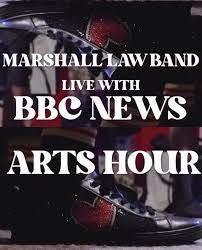 The British Broadcast Company (BBC) hosts a monthly Arts Hour, highlighting local art of various kinds throughout the United Kingdom art scene. Previous Art’s Hour guests have included Keanu Reeves, Billie Eilish, Jennifer Hudson, and many more notable celebrities. Prior to COVID the Arts Hour hosted a tour, going to cities across the globe asking a core question to whatever city they may be in. BBC has begun touring once again, and this tour BBC highlighted the Art of Los Angeles, New York, and Seattle.

With the wide array of talent on stage, many answers came with this question. Answers from the audience were also included in the conversation, and local creatives such as Caleb Brown, OG Mambo, and IamChamel contributed heartfelt answers to BBC’s question. The night was one of the best representations of Seattle any of us have ever seen. Whether it be Chris Mejia cracking jokes about our region’s serial killers, Tracy Rector bringing the Seattle Indigenous perspective, or Marshall Hugh describing the experience of the 2020 Black Lives Matter Protests, the energy of Seattle was captured. Marshallawband gave an incredible performance to be remembered. The energy was captured of Seattle’s immense beauty, but also the turmoil the city faces. Discussions of the housing crisis and racism the city faces took place, and with both local activist Hollis and Halo creator Bonnie Ross on stage, the perspectives of both protestors and billion dollar companies were put forth on the broadcast.

The Arts Hour with BBC seeks to showcase the local art scene of various communities around the world. That mission was not just accomplished with the Seattle Arts Hour, but exceeded it. The Arts Hour not only represented the five creatives on stage, or the 150 in the audience, but it represented the incredible Art that our city holds dear. Whether it be Jimi Hendrix, UW poetry slams, or to the Murals on Capitol Hill…Seattle has an impeccable art scene that was represented tremendously on BBC’s Art’s Hour.