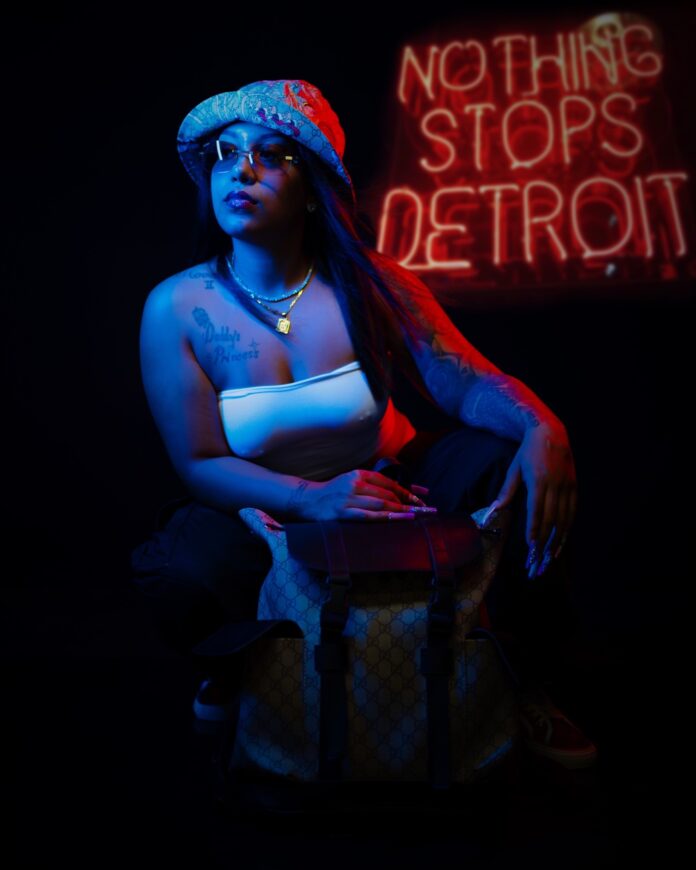 Meet Mena Mahone from the Eastside of Detroit, Michigan. She is a rapper known as “The Bully Boy’s First Lady.” The Bully Boys are a musical rap group from Detroit, MI, that consists of Detroit’s own “Boldy James”, Fast Lane, Redi Rock, JFox the Breadman, Book em Dano, and Mena Mahone. Although she enjoys making music, she is also an actress and clothing designer.

Mena Mahone has always been making music. She began rapping at a young age, but didn’t start taking it seriously until she scored her first single in 2019. It was a single in a Detroit short film called “Trafficking”, produced and written by Carlos Payne and Robert Burston for Royal Payne production. When we asked Mena what her hardest obstacle to overcome was, she said, “My hardest obstacle to finally overcome was me realizing just how talented I am. I used to have a lot of doubts, and second guess myself, but now I realize my worth, and just how amazing and creative I am.”

Mena Mahone is currently signed up under “Bully Boy Fast Lane” for the “Plugged Everywhere” label. Although she is a successful rapper, it doesn’t stop there. She has a clothing line called Bleech and she is an active spokesperson for “Keeping it Moving”  – a nonprofit organization aimed at trying to lift the awareness of domestic violence that’s in our communities. Mena is also featured in three different movies, and currently working on a documentary set to debut on Netflix. When we asked Mena Mahone who she would love to collaborate with in the music industry, she said, “Lil Durk, Lil Baby, Nicki Minaj, Missy Elliot, and Lauryn Hill.”

She wants her listeners to understand the pain and emotions she puts into my music. She wants them to know how hard she works to try to inspire the next person to not just believe, but to know themselves. Her last single she dropped was with The Bully Boys called “Official”. She is currently filming videos for the next four singles she is about to drop and filming a new movie with Robert Burston (Fast Lane).

When she is not working on her many projects, she enjoys exercising and adding to her clothing line. To find out more about Mena Mahone, follow her on Instagram, Tik Tok, Twitter, Spotify and Facebook.