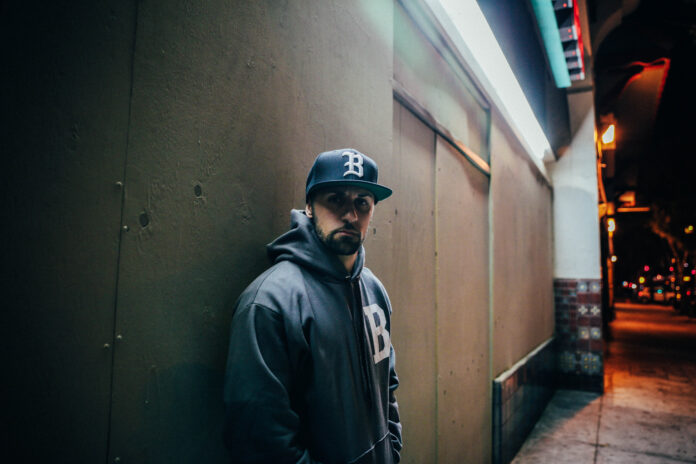 Unkonfined has been making music since early 2005. He started out under the moniker and stage name The Prophet and released two albums (A New Breed of Rap and Sworn In) while signed to Independent label Creative Minds Entertainment with distribution from Fontana/Universal Music Group.
In 2007, Unkonfined teamed up with DJ/producer Nima Fadavi and started the group, Rise of the Revolution. Rise of the Revolution inked a deal with independent powerhouse Ineffable Music Group and released two albums (Never Stand Down and Lethal of Equal). Rise of the Revolution toured all over the country with artists like Collie Buddz, Tech N9ne, Immortal Technique, The Living Legends, Andre Nickatina and Equipto, and many more. They quickly began to take over the underground hip-hop scene. Performing at legendary places like The Catalyst Club in Santa Cruz, CA and The Roxy in West Hollywood, Rise of the revolution became known for their shows. “I’ve been to too many shows where I was so hyped to see the artist but was let down by how wack the live show was that I told myself I’d never let that be me.” said Unkonfined. As a result, Unkonfined and Nima made sure to incorporate dope visuals into their shows. They started shows in gas masks reciting the pledge of allegiance only to scream, “Yeah right!” and drop the beat to their title track, Never Stand Down. The almost always had a painter painting live on stage and incorporated live instruments rather than just rapping over a beat.
In 2009, Nima and Unkonfined parted ways. Unkonfined took a break from music and focused on being a motivational voice and mental health advocate. Through his Twitter account, he began tweeting motivational quotes, coaching, and helping people by the hundreds of thousands. Currently, Unkonfined has almost 600,000 followers on Twitter and continues to be a voice for the voiceless. He spends a good portion of his day replying to and helping his followers navigate through the ups and downs of life.
In 2020, Unkonfined began releasing music again starting with his EP, The Archives and following it up with three singles – Wooden Nickels, Focus, and My life.
In 2021, Unkonfined release three more singles – Status ft. Equipto, Beneath the Surface ft. Esik, and Puppets.
Unkonfined continues to work on music while juggling family life with his quest to continue to motivate people and advocate for mental health.
Social Media:
Twitter – www.twitter.com/unkonfined
Instagram – www.instagram.com/unkonfined
Youtube – https://www.youtube.com/channel/UCSXbfED1nsni_rEKZ2cWKSA
Faceboook – https://www.facebook.com/realunkonfined
Cameo – https://www.cameo.com/unkonfined
Website:
www.unkonfined.com
Music:
Apple Music & iTunes Store – https://music.apple.com/us/artist/unkonfined/1499356627
Spotify – https://open.spotify.com/artist/2LUTjHQxqjLM46EzWDgHyB?si=bjrKalG8TiSVwmnjPshJNw
Pandora – https://pandora.app.link/QhVkk0AaNjb
Amazon Music – https://music.amazon.com/artists/B084X5DDSP/unkonfined?marketplaceId=ATVPDKIKX0DER&musicTerritory=US
Bandcamp – https://unkonfined.bandcamp.com
Deezer – https://deezer.page.link/g4EUmApcukR7gWov7
iHeartRadio – https://www.iheart.com/artist/unkonfined-34064747/